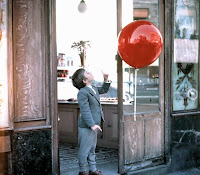 The Red Balloon
Wow! A great film. I felt close to Jeremy when I saw this because he saw it last year when he was here. The little boy was so cute. He really loved that balloon. I remember when I was young I used to cry if my balloon popped. I once accidentally broke my brother's and cried. One other time I was riding in the back seat of my dad's truck and was holding onto three balloons -- two on sticks and one that floated (which was red, incidentally). The red balloon escaped my hand and "ran away". I screamed and my father thought I was in pain or something.

I really was happy to see that film. I've heard so much about it. The balloon was so red and round, it must have been an expensive one. It's strange that the people wouldn't understand this kid's feelings for his balloon.

I always thought of balloons as being sort of companions -- of course mine never stayed around when I left unless they were in the house. Hey! What if when that balloon of mine left me, it was going to find some kid who had just had his killed? Nice thought huh? I wonder if the young mind of a child works like psychologists think adults do. I mean perhaps when my balloon broke I was realizing that my life is so "short"? Naw, can't be.

All through the film I was worried the balloon was going to break. It looked so fragile, well actually it looked much more hearty than any other balloon I've ever seen, but the way that kid pulled it around -- I was sure it would break.

He didn't seem to mourn his lost, broken balloon too much -- when the others came he just dropped the remains of his old friend to get his new friends. But that seems the way a child's mind works. It flits from one thing to another with out stopping at one too long (look at me saying that in this paper). I am really happy to have seen the film. I am seriously considering buying the book, for I saw it at a bookstore.

I liked Clown better though.

Note:
I recall writing this entry clearly. I also remember seeing The Red Balloon for the first time. It stuck with me so long that I ended up getting the VHS for my children as well as getting the book I'd mentioned in the entry.

Of course it is on YouTube: The Red Balloon Part 1 (I'm sure you can find the rest of it on YouTube yourself.)

I've not the film in years, but thought this amusing:
The Revenge of the Red Balloon.

Clown was a film about a young boy searching for his dog in the streets of Paris. I wish I could find that to see again. An Internet check shows that it was directed by Richard Balducci in 1968 and is eligible for upload at World Cat. And a further search shows that several libraries have a copy. 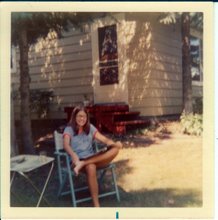